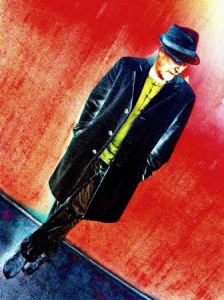 It is with the greatest sadness that we break the news of the passing of Phil Fox, our founder and creative director. He passed away on Monday night, 16th June 2014

Phil was a force of nature, who created a thriving drama company, Outside Edge, from his own experience and dreams.

Phil was clear that his own involvement in drama saved his life and helped his own recovery from substance misuse; it also helped him give meaning to his own previously chaotic life.  In 1998, starting with The House of Usher, a one person play performed at a small self-help group for recovering addicts, and running a weekly drama group at a treatment centre, the seed of an idea of a theatre company for recovering addicts was born.  It was to be a theatre company with a difference, and the first of its kind, involving those in recovery in acting and helping create plays drawing on their own experiences.  At the centre would be Forum Theatre, where, after the initial performance, the play could be re-run so that the audience could actively participate in changing the negative consequences of addiction.  This often helped people make sense of their own personal dramas. Topics covered included domestic violence, relapse, child abuse, and shows were performed around the country in treatment centres, theatres and prisons. A number of participants commented that the performances were vital in helping them understand their own addictions.

Phil carried out many roles in those early days, including fund-raiser, actor, writer of the plays as well as booking the venues, driving the van and looking after the actors.  He also initiated the weekly drama groups and provided training for professionals. Just this year Phil had begun to publish his research into the effect of drama on addiction, writing a chapter based on his life and practice for a book published in May, and he generously encouraged others to do so as well.

Phil’s work has touched many people, including many to whom he was a mentor and father figure. The real tribute that the partners and friends of Outside Edge can pay to Phil is to help the company’s work to continue as his legacy.  He will be greatly missed as a husband, father, and friend, as well as the creator of a truly inspirational theatre company.

One thought on “Phil Fox obituary”