You are here
Home > Projects > Archive > A High Price to Pay

The Outside Edge Theatre Company presents: 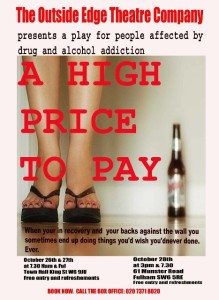 A drama performance with  forum  supporting recovery From substance misuse

‘Megan has just left treatment for her drug addiction. With her life apparently stabilised, she feels confident enough to visit her estranged alcoholic father, retired solicitor Gareth Thompson. But the visit sparks open a sequence of events that threatens to push her into old behaviours. Behaviours that have the potential to destroy her new found freedom from active addiction.’

After the performance there will be a chance to discuss the issues raised in the play and an opportunity for audience members to suggest alternative action and endings in a forum. This will last for approximately 20mins.