Outside Edge’s first play created for delivery to the general public.

Based on the story of one individual and their hunt for their estranged daughter, Burning Maps is a play that takes its audience on a journey, crashing through barriers both geographical and of time. Talking frankly, without judgement and without a social change message, this play gives an audience an opportunity to explore issues surrounding addiction, getting a frank and clear picture of history, emotion and circumstance from differing points of view. 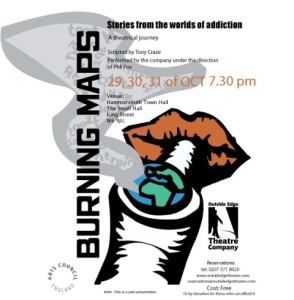 Recovering addict, Wu Rong, sets off halfway across China, on an anti drugs march, and in search of her missing daughter, Kang. Travelling across different time continuums, and different continents, Kang, however, leads Wu off course – through stories of death and addiction in contemporary Kabul, Baghdad and London, and in 19th century Humen, China, where ‘the biggest drug bust in history’ takes place, with the burning of 1.5 kilos of opium. With her mother, Kang would explore the very roots of addiction – but when mother and daughter finally join, will Wu still insist on delivering her anti drugs petition – or will Kang have moved her beyond old political paradigms of prohibition/legalisation – perhaps beyond spatial/temporal maps altogether?